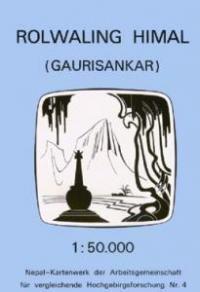 Traditionally referred to as “the Schneider maps”, titles in this series cover Nepal’s most popular trekking regions at 1:50,000 or 1:100,000. The maps were originally prepared by the Austrian climber and cartographer Erwin Schneider and for nearly five decades provided the best and often the only coverage of these areas. Now sponsored by the German Scientific Association of Comparative High-Mountain Research (Arbeitsgemeinschaft für vergleichende Hochgebirgsforschung), the maps are still quoted in most trekking guides to Nepal. Most maps have contours at 40-m intervals and, with bold relief shading and colouring for the glaciers, provide a vivid representation of the terrain. Margin ticks and crosshairs give UTM coordinates plus latitude and longitude.
Map legend is in English.