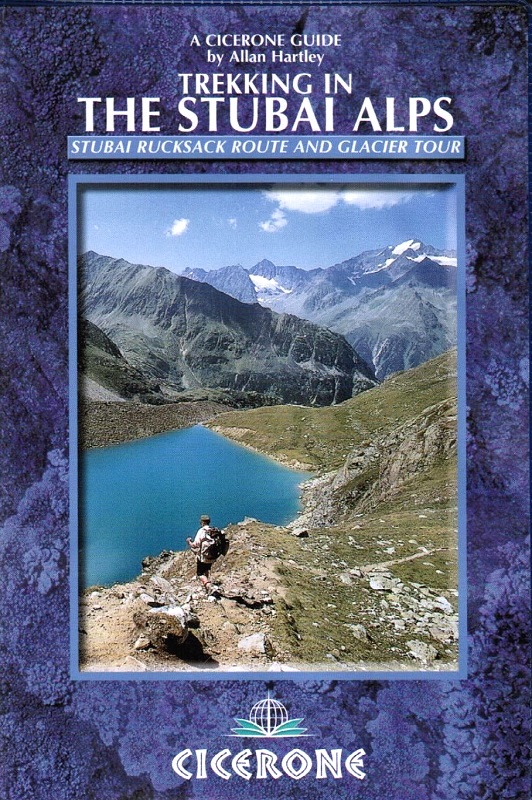 Trekking in the Stubai Alps

An essential guidebook for anyone trekking the scenic Stubai Alps, in the Austria Tyrol. Two multi-day hut to hut hikes are described. The Stubai Rucksack Route links eight huts without crossing glaciers or difficult passes, whereas the challenging Stubai Glacier Tour involves much glacier work. Both treks easily fit into a two week holiday.
Of all the many Alpine areas, few can match the Stubai Alps in the Austrian Province of Tyrol. With shapely peaks, good paths and some of the best huts in the Alps, it offers ideal hiking routes for mountain walkers. Trekking in the Stubai Alps offers two brilliant routes  for the experienced walker: the Rucksack Route and Glacier Tour, both of which fit easily in a two week holiday.

The Rucksack Route
This 9 to 11 day route links eight huts each with connections directly to the main Stubaital valley, with the exception of one, which means it’s possible to start or end the route according to your preference and can be done in either a clockwise or anticlockwise direction.

Its complete traverse is possible without crossing glaciers or difficult passes which makes the route ideal for mountain walkers, families and others with limited alpine experience. However that is not to say you will not encounter snow, steep ground or the odd scramble here and there. The guidebook also recommends several summits that are attainable along this route for those with sufficient experience.

The Stubai Glacier Route
This  7 to 8 day route, also known as the Hoehen Weg, involves a lot of glacier work. It is essential that you have the necessary skills to deal with a great variety of terrain that will be crossed. Familiarity with the use of equipment such as ice axes and crampons as well as having good knowledge and experience on crevasses and rope management is essential.

Nevertheless this is a fantastic multi-day route which is ideal for climbers visiting the Alps for the first time as long as they have done the necessary preparation. This is also a hut to hut tour yet instead of avoiding the glaciers as in the first route, the very essence of this tour is to traverse the them. It will suit aspirant alpinists wanting to add to their alpine experience without feeling over-committed and out of their depth.

Seasons
the summer alpine season starts when the huts open in mid-June through to the end of September; snow can linger on north facing slopes well into July; mid- July through to mid-September is warmer and more settled
Centres
Neustift, Fulpmes, Telfes
Difficulty
all tracks and trails are waymarked and frequently signposted; unless venturing onto the glaciers no special equipment is needed nor additional climbing skills required
Must See
the Stubai embraces some of the best scenery in the Eastern Alps; the snow-capped peaks of the Wilder Freiger and Zuckerhuetl chain stand proud along the Frontier Ridge in an area with over 100 peaks above 3000m

(with thanks to Tom Kenny)

August 2013
page 38
Maps
Other useful maps are Alpenvereinkarte
31/3 Brennerberge; Scale 1 to 50,000
31/5 Innsbruck; Scale 1 to 50,000
Stubai Rucksack Route
page 61
Alternative start: Stage 1B Maria Waldrast Monastery to Padasterjoch Haus
The path has been cleared from the Kalbenscharte to the summit of the Kessel Spitze. However, the route from Serlesjoch to the Lampermahd and across Uber der Mauer is still ill-frequented and not recommended.
page 73
Stage 2; Innsbrucker Hut to the Bremer Hut
The path has been cleaned up and improved in several areas with new fixed-wire protection being added. The alternative high-level route via Lauterer See and Innere Wetter Spitze (page 76) is currently closed due to a rock fall. There is a large sign in place to say the route is Gesprutt and closed.
page 96
Stage 5B; Sulzenau Hut to the Dresdner Hut via the Grosser Trogler
Fixed-wire rope protection on both sides of the mountain has been renewed and improved.
Stubai Glacier Tour
Due to severe recession of the glaciers, the following routes are affected:
page 141
Stage 5; Hildesheimer Hut to the Mueller Hut
Ascent of the Zuckerhutl
The mountain has lost such a severe amount of snow/ice covering that it has lost its snowy mantel from the summit. The result being that the top third of the previous snow dome is now rock. As per the guidebook, climb to the Pfaffensattel and dump your rucksacks to allow a minimal rucksack-free ascent of the mountain. Follow the well beaten snow trail to the foot of the summit rocks. Discard ice axe and crampons and adjust the rope for short roping to the summit. The routes meanders left (south), scrambling around boulders and blocks with fixed aid in place to emerge on the summit complete with ornate summit cross.
page 144
Alternative Ascent of the Zuckerhutl via the Pfaffenschneid and interconnecting ridge
Due to recession of the snow on which the route depends, this route is now only possible during early season.
page 144
Ascent of the Wilder Pfaff
The route as described in the guide is still viable but an alternative is to round the base of the Wilder Pfaff (north), then turn to climb the steep snow slopes (south) towards the summit.
In descent the ridge has been fitted with new wire ropes.
page 157
Stage 6; Mueller Hut to the Nuernburger Hut; Escape Routes from the Mueller Hut and Becher House
The descent from the Mueller Hut to the Sulzenau Hut via the Fernerstuebe Glacier and Pfaffennieder is not possible due to a huge rock fall and recession of the glacier.
The descent from Becher Haus to the Nurnberger Hut via the Freiger Scharte is not possible due to severe recession of the glacier.
In severe weather you should sit out the weather at Becher Haus until it is safe to cross back into Austria via the normal route to the Nurnberger Hut. Should the weather continue to deteriorate, the only safe exit is to descend to the Teplitzer Hut or further down the valley into Italy and make a safe return back into Austria via Sterzing and the Brenner. There are frequent trains.
Hut Directory
page 163
Bremer Hut
The hut is under new management:
Georg and Anni Segar
Mauern 66
A-6150 Steinach in Tyrol
Austria
Telephone: (0043) 0664 272 8071
page 172
Mueller Hut
New telephone numbers:
Heidi: (0043) 0669 18 678965
Likas: (0039) 0329 234 6943
page 178
Sulzenau Hut
The hut will be under a new manager in 2014.