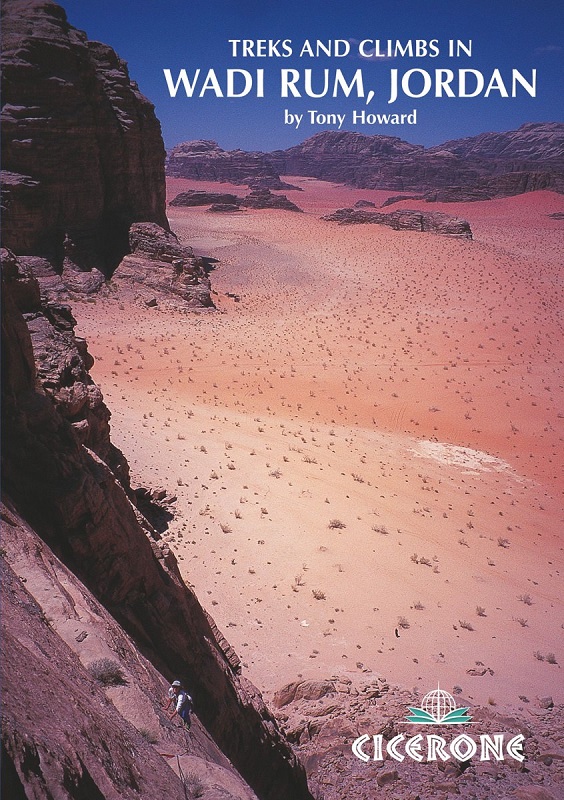 A guide to treks and climbs in Wadi Rum, Jordan, one of the world's leading desert climbing and trekking areas. The book includes thorough visiting information and an extensive selection of explorations, treks and climbs both trad and sport, at all grades. Includes all massifs in Rum plus outlying areas.

Seasons
Spring and autumn are the norm, with pleasant weather. Summer is for masochists who don’t need water; winter can be very cold and sometimes wet.
Centres
Aqaba is closest. Amman is far to the north. No hotels in Rum; these are outside in the Aqaba and Petra areas. Campsite, plus villages of Rum, Rashdiya and Quweirah.
Difficulty
Treks, camel and 4WD journeys, plus trad and sports climbs throughout the grade range.
Must See
Rum is stunning with its enormous red cliffs and canyons - 'vast, echoing and godlike' said TE Lawrence. Petra makes a rather brilliant rest day.

Overview
A guide to treks and climbs in Wadi Rum, Jordan, one of the world’s leading desert climbing and trekking areas. Wadi Rum is tucked away in the south of Jordan, close to the Red Sea port of Aqaba, remote and splendid in both landscape and culture, yet only a five-hour flight and a short onward journey from Europe. The first edition of this guide, published in 1987, contained about 140 routes. Since then the number of climbs has doubled. Here are detailed descriptions and topos of all the known routes to date, from short walks, camel treks and 4WD journeys through to sports climbs and major ‘big walls’ of the highest technical difficulty. Additionally the author, Tony Howard, provides information on sites of antiquity, flora and fauna, and life with the Bedouin. It is their roguish humour and warm hospitality as much as the magnificence of these deserts and mountains that make a visit to Rum a unique experience. This book tells you everything you need to know.

Jordan in general
Jordan was relatively quiet this year, but problem free despite Mid East and North African turmoil. There were a few marches in downtown Amman for increased democracy (the King selects the government) and some in the wealthier uptown in support of King Abdullah. And that was about it. Jordan was, as always, a good place to be in the spring even if the weather was a little cooler than usual.

The northern hills
This area is still very much untouched by trekkers though it is becoming to be visited by Jordanian walking groups and climbers who have now discovered what a marvellous country they live in, full of adventure opportunities.

Amman
The capital now has its own climbing wall, see www.climbat.com.

Dead Sea Canyons
As elsewhere in Jordan, these superb canyons are becoming increasingly popular with Jordanians. They usually visit the canyons with Jordanian adventure travel specialists such as Terhaal who take regular canyoning and trekking trips. All canyons are equipped with fixed abseil points, though the canyons themselves sometimes change due to flash floods. Wadi ibn Hammad (R53) now has a 3m drop in it’s upper section where none existed before.

Petra
In Jan 2011, Petra fees rose considerably. A day pass is now 50JD (about £45). There have beena number of complaints in the Jordan Times newspaper about this (including one from us), but it seems unlikely things will change. In fact they may even be increased again later this year.

See www.your-guide-to-aqaba-jordan.com for more information. There is also talk of requiring all trekkers passing through Petra to hire a local guide, but we have no firm news on this.

Jebel Mas’uda
South of Petra, following years of discussions with the local Saidiyin Bedouin, RSCN proposals to create the Jebel Mas’uda Reserve (see map on page 215) have been dropped. This is good news for trekkers and climbers as the area will remain open, but maybe not so good for the area as collecting wood for fires and hunting for ibex and other game will continue. It’s a great area well worth a visit.

Rum
Nothing to report here, except to say that more Bedouin are offering homestays in the village, and there are more Bedouin-style and upmarket tourist camps in the desert. The best place to ask is around the Rest House.

New routes
A huge number of new climbs have been done. Details will be found in the New Routes Book at Wadi Rum rest House. These include the discovery of more classic Bedouin Climbs, many by our friends, Gilles Rappeneau and local Bedoiun Guide Talat Awad. Gilles has done a pocket guide to these routes, details on his website. Talal has a copy and knows the rotes if you need a guide. In Nov 2005, Gilles also found the long-forgotten Bedouin Route to the top of Rum's second highest summit, Jebel um Ishrin, giving it three stars.