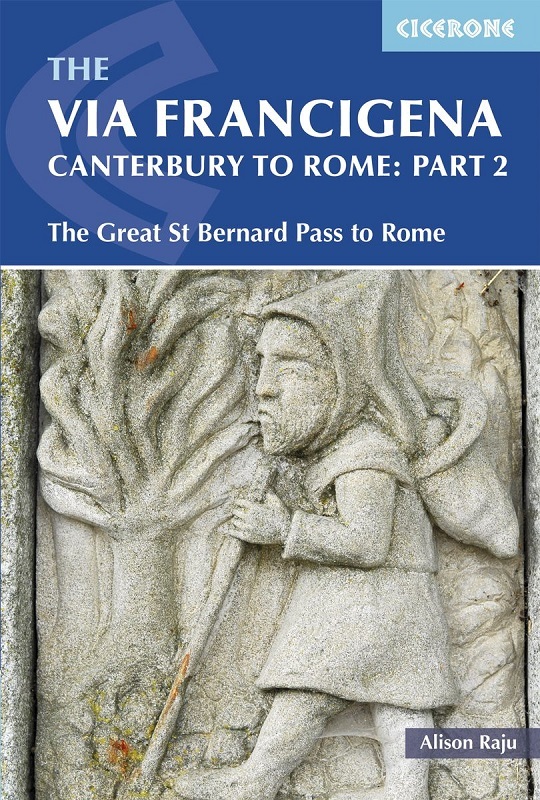 The Via Francigena Canterbury to Rome - Part 2

An essential guidebook for anyone planning to walk the Via Francigena pilgrim route from Canterbury to Rome. Part 2 describes 940km of the pilgrimage from the Great St Bernard Pass to Rome. Contains all the planning information you need for your journey, including details of facilities and accommodation along the route.

Seasons
the Great Saint-Bernard Pass is only accessible from late-May to mid-October so the pilgrim walking the entire route in one go will need to take this into account; the weather can be extremely hot in the summer but in late autumn/winter the daylight hours available for walking are drastically reduced

Difficulty
apart from the steep descent from the Great Saint-Bernard pass (2473m), the section over the Cisa Pass (1041m) and the constant ups and downs in Tuscany, this route presents no difficulties for anyone in normal health who is reasonably fit

Must See
a pilgrimage on foot from Canterbury to Rome, starting, in this second volume, at the crossing of the Alps by the Great Saint-Bernard Pass on the border between Switzerland and Italy and finishing in Rome

Overview
The Via Francigena is an almighty 1900km pilgrim trail from Canterbury to Rome. It leads down through relatively flat sections in north-eastern France, then reaches the mountainous Jura, continues through Switzerland and crosses the strenuous Great St Bernard Pass over the Alps, before heading through Italy to arrive at the Eternal City of Rome.

Taking an average of three months to complete on foot, pilgrims have been undertaking the Via Francigena since the 8th century, and it is one of Europe's great pilgrimages. From the halfway point at the Great St Bernard Pass in the Alps, this book splits the second half of the pilgrimage into five sections (with further start points in Vercelli, Passo della Cisa, Lucca and Siena) and concludes by arriving at St Peter's Square in Rome. All five start points are places where pilgrims can easily reach or leave the route by means of public transport, should they wish to tackle the journey in shorter stages.

In general the Via Francigena is well and clearly waymarked in Italy, although the style, design and colour of the signs varies quite a lot. Along much of the way is the red and white adhesive tape of the official route, marked with a black pilgrim silhouette to distinguish it from other long-distance footpaths. In other places are the older markers with either a yellow or a brown and yellow pilgrim carrying a bundle on his back, as well as the yellow and white stickers.

Most people who walk the Via Francigena are not experienced walkers. Walking a pilgrim trail, throughout history, has always been a means to an end and walking a means of transport. This makes the route suitable for all reasonably fit people. It passes through many historic towns and villages, with interesting churches, cathedrals and religious monuments to see and visit along the way.

• second 940km of the route described in detail, with colour sketch maps
• details of facilities along the route as well as information about all the key sights
• Part 2 of a 2-part guide covering the full route. Part 1 describes the trail from Canterbury to the Great St Bernard Pass

add to wish list
€ 22.00
quantity
- 1 +
ship to :: Italia
Corriere espresso € 5.50
availability
usually shipped within 10/25 days
add to cart
About cookies
We use cookies on our website, the cookies we use do not store personally identifiable information nor can they harm your computer. We want our website to be informative, personal, and as user friendly as possible and cookies help us to achieve that goal
What are cookies?
A cookie is a small file and holds a certain amount of data, which our website can send to your browser. It may then be stored on your computer's hard drive and can be accessed by our web server. This cookie data can then be retrieved and can allow us to customise our web pages and services accordingly. It's important to clarify that cookies do not collect any personal data stored on your hard drive or computer.
How does this website use cookies?
• Session cookies are used in order to allow customers to carry information across pages of the website, without having to re-enter such information. These cookies delete themselves automatically when you leave a website and go to another, or when you shut down your browser.